In this article we’ll be learning about multithreading concept in Java. But before we proceed with multithreading let’s understand what threads in Java are. Now threads is something which is one of the most important topics in Java.

We’ll learn about the following topics in this article:

In layman’s language a Java thread is simply a lightweight sub process. So, when the application is running the operating system creates a process. Java Virtual Machine will take care of Java applications, so process would be created and each and every process will have a main thread. A java thread is the smallest independent unit of a program which contains a separate path of execution. The main thread in java is an execution context where certain jobs are executed one after the other in a sequence. A thread in java is created and controlled by java.lang.Thread class which is present by default in the lang package.

When we create a thread, it will have a life-cycle. A thread can lie only in one of different states at any point of time. Typically, a thread will be in a new state when it is created then it moves to the runnable and then to the running state. Finally, the thread will end in a terminated state. In between a thread can have a waiting state which can iterate between runnable and running state. 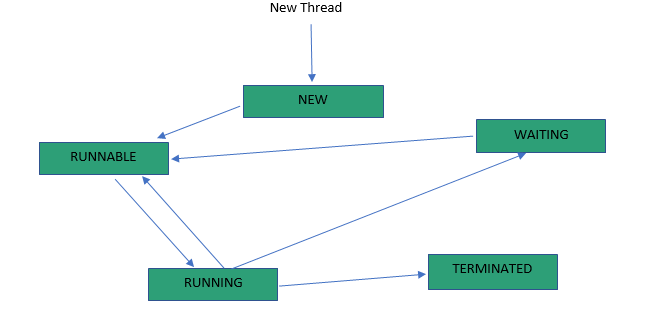 1.New State: In this state a new object of a thread is initiated. A new thread begins its life-cycle in this state & remains here until the program starts the thread. We can also say that a thread is born in this state which is why it is also called born thread.

2.Runnable State: Once a thread is created we can start the thread. A thread stays in this state until it is executed. After starting the thread, it comes under runnable state.

3. Running State: In this state a thread is running which means it is executing a run () method from thread class and we have the yield() method that can send the thread back to the runnable state again.

4.Waiting State: When a thread enters a state of inactivity such that it is not performing any action it is known as waiting state. In this state the thread waits for some other thread to give back the data or it is sleeping or blocked at certain scenario or a use case.

5.Terminated State: When the thread has completed its task after execution it is known as terminated state.

Let’s understand the threads with the help of an analogy. Suppose we want to download an image from a server. Now threads are typically used when we have to perform a long running operation. Downloading an image seems to be a simple operation but it can be a long running operation because it is dependent on the network speed. When downloading an image, we create a new thread, and, in the background, we’ll start fetching the bytes from the server and in running state the thread is continuously fetching the data. There can be a state called waiting when network connection gets disconnected. Now the thread can wait until the network connection is reestablished and it will get terminated if the image is properly downloaded.

We can create a thread in two different ways, either we can extend the thread class or we can implement the runnable interface.

Creating a thread with Runnable Interface

Many times, we use inheritance when our class is inheriting some other class. But it can’t inherit thread at the same time because multiple inheritance is not supported in java. So, if we are already extending a class we can’t extend a thread class, but we can create a thread with Runnable Interface. Rest of the process remains same like in extending a thread class. We override a run() method, create an object of the class and finally invoke the start() method.

The main thread can be controlled by calling the currentThread() method from thread class. With this method a reference is returned to the main thread on which it is called.

Few of the advantages of multithreading are:

1.In multithreading the threads are independent so that each thread does not affect other thread.

2.It helps in saving CPU usage as threads share the common memory area

3.With the help of multithreading multiple operations can be performed simultaneously at the same time.

Let’s understand multithreading with the help of an example.

Like other Java methods multithreading is a powerful method but it takes time to master it. It is highly suggested that you should learn about the pros and pitfalls of using multithreading.

Use Java in Web Technology